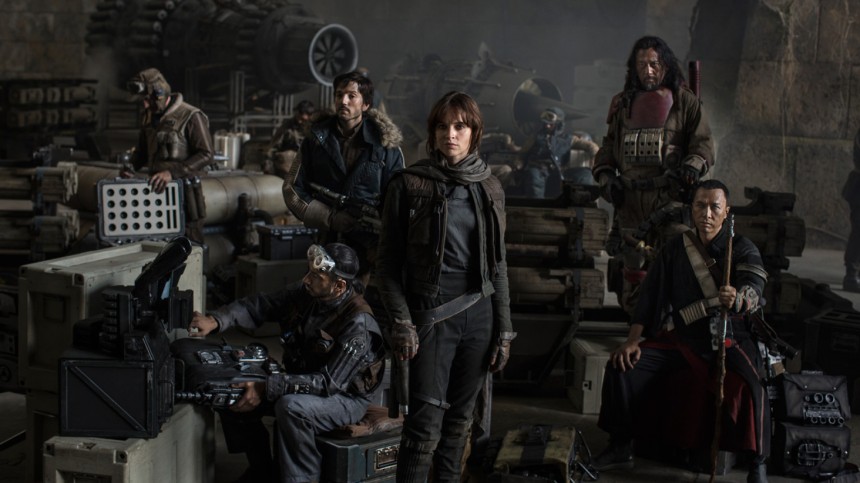 So here it is. A week before Christmas and Disney offer up an early gift in the form of the first ‘non episode’ film.  The film is directed by Gareth Edwards (Godzilla, Monsters) and written by Chris Weitz and Tony Gilroy.

The film takes place in close proximity to the start of ‘Episode IV : A New Hope’, which if you recall, begins with the introduction of this…

It is a period of civil war. Rebel spaceships, striking from a hidden base, have won their first victory against the evil Galactic Empire. During the battle, Rebel spies managed to steal secret plans to the Empire’s ultimate weapon, the DEATH STAR, an armored space station with enough power to destroy an entire planet. Pursued by the Empire’s sinister agents, Princess Leia races home aboard her starship, custodian of the stolen plans that can save her people and restore freedom to the galaxy….

…and Rogue One is the tale of those rebel spies and their attempts to steal the plans that are so central to the story of Episode IV.

As with such films, I am going to keep any explanation of the plot beyond this to a minimum for fear of spoilers.

The key group of spies is made up of an eclectic mix – Felicity Jones as Jyn Erso, Diego Luna as Cassian Andor, Donnie Yen as Chirrut Imwe, Riz Ahmed as Bodhi Rook and Jiang Wen as as Baze Malbus. Additionally Alan Tudyk voices the droid K-2SO.

On the darker side of the force, we mainly have Ben Mendelsohn as Orson Krennic, a director of weapon development for the Empire, who is overseeing the construction of the death star.

This film is spectacular. It is a perfect balance of new and old, of funny and dark, of a story that you know and one that you don’t. It isn’t an homage to the extent of Force Awakens but places enough nods through the film to the broader story that fans will be delighted.

The cast all deliver, but Luna, Jones and Mendelsohn all stood out for me. The humour that Tudyk brings to the film is also great.

It perfectly ties into the franchise, yet stands alone, and actually probably makes Episode IV work even better with the new context that the film delivers.

At a later date, I will write much more about this film, but for now, at a time where so many people are yet to see it, I think we’ll leave it there.

It’s very much the prequel that fans wanted all along and bodes well for the concept of standalone Star Wars universe films.