“There’s been an awakening. Have you felt it?”

So here it is.

The 7th Star Wars film (interestingly also the first time that the Episode number and actual film number are the same) is out and now busy breaking box office records all over the place.

Directed by J.J. Abrams (Star Trek reboot guy) and written by a combination of Abrams, Lawrence Kasdan, and Michael Arndt, we are returned to a galaxy far, far away. 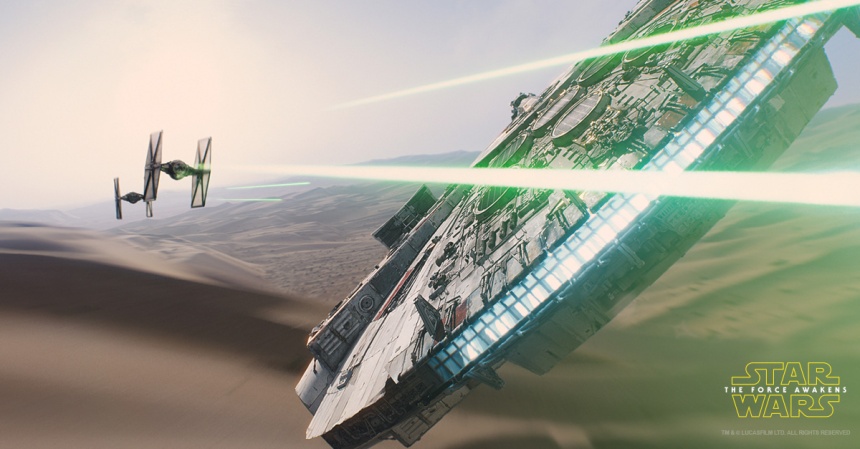 Here we meet Rey (Daisy Ridley), who is a scavenger on a remote desert planet. She meets a droid (BB-8) and Finn (John Bodega), a former stormtrooper on the run from the First Order (the new version of the Empire), and adventure ensues.

That’s all I will say about the plot points.

Going into this film, one of the key challenges for Abrams and co was to find a balance between the old world style of film making that was the basis of the original trilogy, whilst still using CGI to develop the story and ensure it holds up in modern cinema. This was something Lucas failed to do with the prequel trilogy, losing the films in overdone special effects.

What we get from this film is a very carefully constructed film that works hard to achieve this. It is grounded in its origins with themes that feel very familiar, a score that regularly evokes memories of previous scenes, the ‘legacy players’ that we all know and love,  and regular nods to the previous films throughout. Meanwhile, bringing 2 new previously unknown actors (Ridley and Boyega) in key roles and delivering a new adventure in this universe that is so widely loved.

Abrams and team have hit a home run with this. They have struck the balance between telling a new story but with so many familiar elements that it ticks as many boxes as they would have hoped for.

And that, ultimately is my only nagging concern. Disney paid George Lucas $4 billion for Lucasfilm.  Whilst I’ve been riddled with excitement about a new Star Wars film, this also does signify the start of Disney doing a ‘Marvel’ to the Universe that Lucas created.  By 2020, there is already a further 5 films potentially to come out (Rogue Squadron, Ep VIII, Ep IX, Hans Solo / Boba Fett solo films). You can’t help but hope that in trying to get as much out of their investment, that they don’t ultimately begin to diminish what was so magical about these stories.