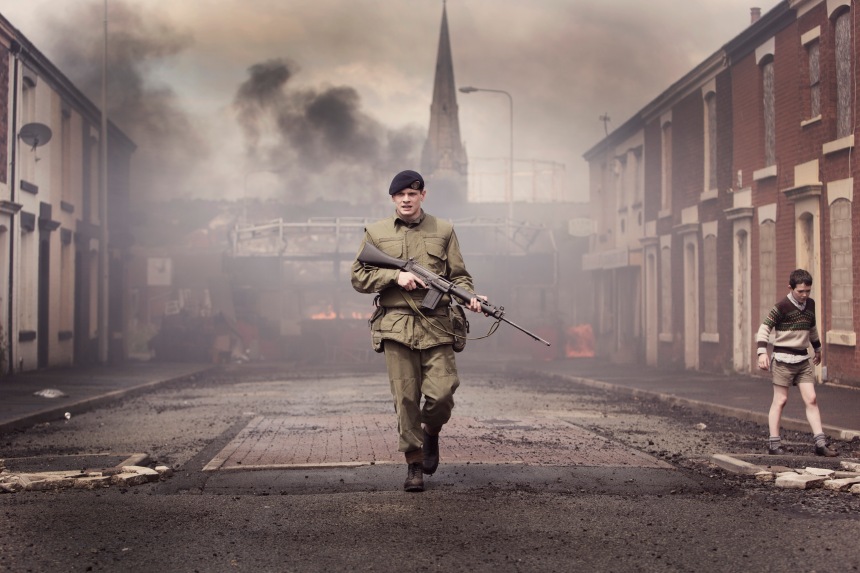 Set in Belfast in 1971, and heavily within the complex troubles of the time, the film ’71’ film debut for french director Yann Demange and also screenplay writer Gregory Burke.

The film follows British army private Gary Hook (played by Jack O’Connell) initially in training, and then into his first deployment, into Belfast, Northern Ireland. After his unit loses control of a riot in the streets of a housing estate, Hook is stranded, lost in the city and behind enemy lines, desperately attempting to make it back to the barracks.

This film oozes dramatic tension. The settings, the camera work, the score all combine to keep a pace to the film, but without cost of plot or character.  Throughout the film you’re left unsure of who to trust and never really feeling comfortable about what may next happen.

O’Connell delivers a huge performance and brings real depth to the role in both his initial scenes pre deployment, and throughout the night and so much of the film is determined by his ability to convey the fear and desperation that he has through the night. By virtue of his situation, the strength of the performance is how much he conveys with relatively little dialogue in the film.

Beyond the lead, supporting performances by Sean Harris and Paul Anderson especially stand out in the film as well.

This film certainly brought both O’Connell (who went on to make Unbroken next) and Demange to the fore and we can only hope that their future films build on this debut success.

’71 is currently available on Amazon Prime