The Big Short is the new film from director Adam McKay (Anchorman, The Other Guys), and is set in Wall Street in the build up to the 2007 collapse of the US housing market and subsequent economic issues, and based on the book by Michael Lewis (Moneyball, The Blind Side.

The film opens is 2005 with Mark Burry (Christian Bale) runs an investment portfolio, and began to identify that the package mortgage investment products that had become a staple in the market, were appearing increasingly risky. His opinion is that by the time 2007 arrives, their default rate will be so high that they will begin to collapse the entire housing market (well highlighted in one scene with a Jenga tower).  He begins to lay bets against the market, which are soon followed by other investors (such as Mark Baum – Steve Carrell) and brokers alike (such as Jared Vennett – Ryan Gosling). 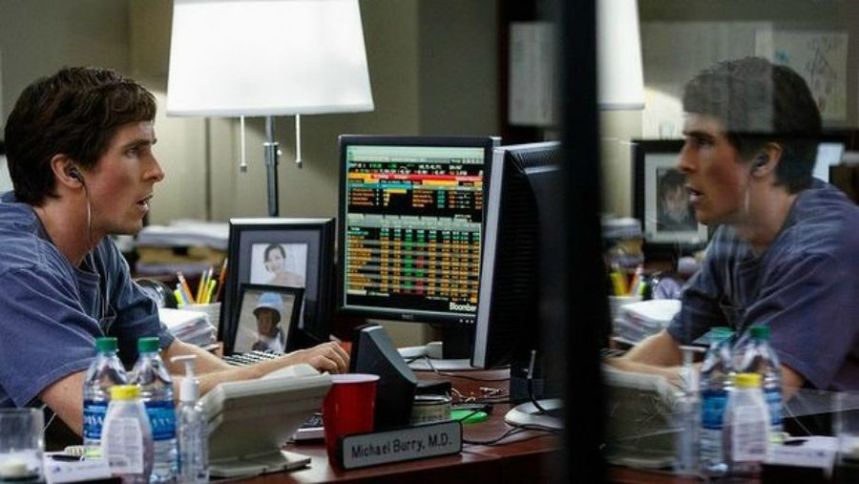 The films leads us into 2007 and we follow the story of these loans, but also into some of the reasons behind the situation, including the involvement of rating agencies (S&P, Moody’s), regulatory bodies (such as the FCC) and investment brokers and salesmen increasingly motivated to re-package and re-sell this high risk debt.

The basis of the film, in dealing with Credit Default Swaps and CDO’s is within a highly complex financial product and the film is careful to make sure that you understand the premise. Gosling’s character breaks the 4th wall a number of times, and a number of sequences feature celebrities (from pop stars to chefs) explaining elements of these financial dealings in inventive ways.

The film transitions through time with rapid edit sequences of various items that would have been newsworthy at the time (celebrities, releases of the iPhone, political updates) but each time these appear, they really just remind you of what was actually making the news when the story that is unfurling wasn’t being reported anywhere.

Make no mistake, this is a set of characters that bet huge amounts of money against the US housing market, and whilst their motivations are partly as a result the stupidity of ‘big banks’, they were out to make huge profits.

Each of the 3 main performances (Bale, Gosling and Carrell) are fantastic and Bale’s recent oscar nomination for the eccentric Burry is well deserved, although Carrell can only have missed out by inches as well.  The chemistry established in ‘Crazy, Stupid Love’ between Carrell and Gosling is still there as well. 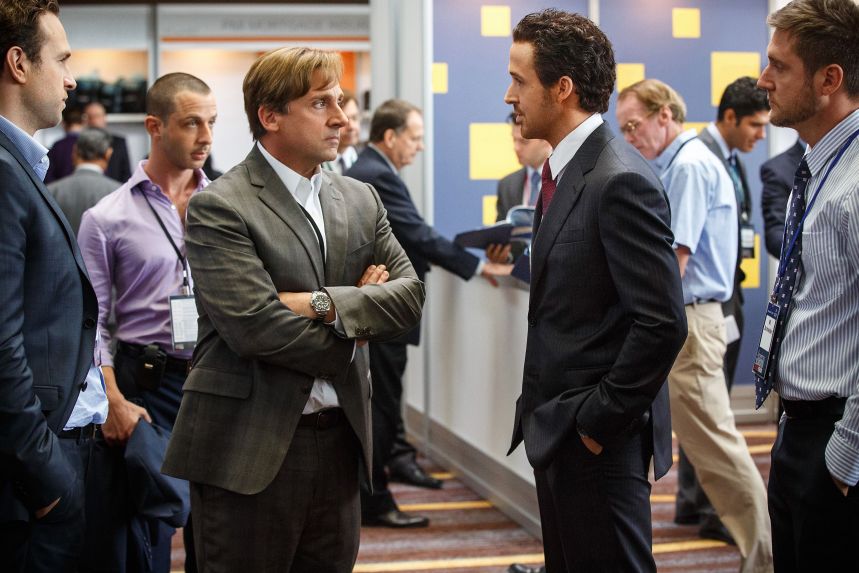 The film successfully treads the very fine lines between humour in a film that is based in a situation that led to misery for millions, and in framing characters, who whilst motivated in part by profit from that situation, show a clear disgust at it.  This film could have misfired in a huge way, and be seen as investors who find humour and potential profit in the near collapse of the entire US economy…

..What it doesnt is tell a modern day tale that should stand as a warning about the true dangers of capitalism and show that in our world today, a small number of people can create consequences for many.

One of the criticisms of Scorsese’s ‘Wolf of Wall Street’ was the in laying out the antics of Jordan Belfort and his team, there was never a sense that the film took a moral view of their actions, almost glorifying them. There’s no risk of that with this film. The disdain that the film has for the bankers who were responsible for the crisis is palpable. That’s even less of a surprise when considering McKay’s previous work ‘The Other Guys’ was heavy on banker/share dealing mistrust.

In this, the film strikes a strong balance across a number of different elements. Humour and drama. Complex situations explained simply. Joy and sadness.  It is a hugely important story of our time and one that has been delivered to a high standard. People lost their livelihoods, homes, pensions and futures as a result of the crisis created by these types of products, and the failure of the system to prevent it.

It deserves a lot of recognition however I fear will largely miss out to different films for different reasons however it has a strong chance for adapted screenplay and also the editing of the film was a huge achievement.

So here we are today. 10 years on since the sale of these sorts of investments were in full swing. And you can’t help but wonder exactly what we’ve learned from the whole event, and exactly what we’ve done to stop it ever happening again.