Posted on February 7, 2016 by Film Geeky Leave a comment

For the 6th day in the Alphabet challenge, we’re off to Minneapolis, Minnesota for the film 1996 film ‘Fargo’.

Directed and written by the Coen brothers, this classic comedy / drama / thriller film is the tale of a a kidnapping and subsequent events that spiral out of control. It went on to  reap a number of awards including 2 academy awards and starred Frances McDormand, William H. Macy, and Steve Buscemi amongst others. 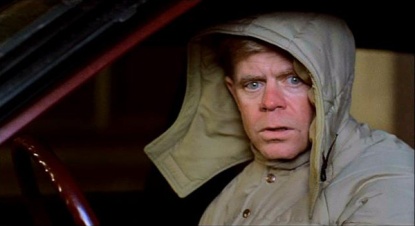 The tale centres on Jerry Lundegaard (Macy) who is a salesman in a car dealership owned by his wife’s wealthy father. Lundegaard, is in financial trouble and his plan to get out of it has been to hire 2 men to stage a kidnap his wife, so he can use her father to pay a ransom and keep the majority of it for himself.  Sounds simple right?

The 2 kidnappers that he hires, from Fargo in North Dakota, are played by Buscemi and Peter Stomare. From here, problems begin and escalate to the point of a multiple murder.

Here we meet heavily pregnant police chief Marge Gunderson. She and her team begin attempting to solve the crime whilst the desperate Lundegaard tries to being this ‘deal’ to a good outcome.

This film features some remarkable performances and most notably McDormand is phenomenal with a ‘Columbo-esque’ detective as she works through the case with a disarming style but high intellect. She ‘waddles’ through the film trying to understand what has happened, whilst also dealing with her simple homelife (her husband Norm, for example, who is competing to have his art on a local stamp).  Mcdormand won the Oscar for Best Actress for the role.

Macy is wonderful as the car dealer who finds himself out of his depth. A man desperate to find a deal that will get him out of trouble and establish himself as a provider out of the shadow of his father in law (Harve Presnell).

The film is beautifully written and the balance between drama and comedy is struck perfectly. It would go on to win the Oscar for original screenplay for the Coen brothers

Another point of note is the quality of the cinematography which is by Roger Deakins as it perfectly captures moments of desolate winter scenes. As I write this, Deakins is nominated for his work in last year’s Sicario (Sicario Review) which is his 13th nomination (no wins from the first 12 nominations) and his work on Fargo was one of these.

I love this film. Its setting feels like nothing we’d seen in major film before. The accents of the locals, the slow patient dialogue combining with the drama and the events spiralling out of control. Macy and McDormand’s scenes together make for classics interactions. If you haven’t seen it, it’s worth watching straight away.

And you’ll never look at a woodchipper again.