Posted on February 8, 2016 by Film Geeky Leave a comment

Bradley Cooper plays Adam Jones, a former superstar chef, who has just completed his self imposed penance of shelling 1 million oysters over  a 3 year period in a New Orleans restaurant.  3 years ago he was a 2 michelin star chef in Paris until he lost it all through addiction to drink and drugs.

Now though he is on a quest to achieve redemption in the form of achieving the incredibly rare 3rd Michelin star.

He sets of to London to head up the Langham, a restaurant managed by former colleague Tony (played by Daniel Bruhl).  Jones then begins putting together somewhat of a misfit team including a former foe (Omar Sy), a street food chef and under achieving but full of potential Helene (played by Sienna Miller). 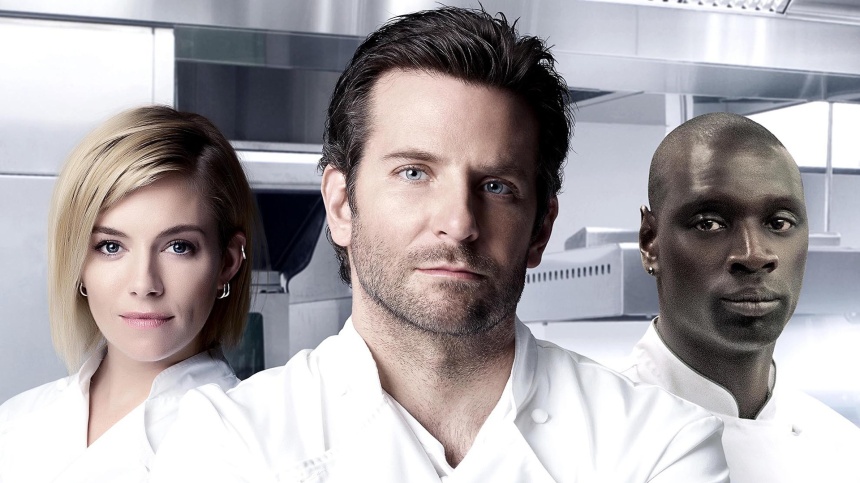 To compound his troubles, chef Reece (played by Matthew Rhys) who is the ‘Salieria to his Mozart’ is not only also based in London but has already achieved the much desired ‘3rd star’.

The kitchen makes for a tense setting for large parts of the film as the newly formed team begin to form and moments of shouting, plate smashing and demands to apologise to poorly cooked fish all play out are all reminiscent of Gordon Ramsey’s finest moments.  Conflict also arrives in cooking styles as Jones and Helene attempt to fuse the latest trends and classic approaches.

Its the second time that Cooper and Miller have worked together and they strike a good balance of kitchen tension and romantic chemistry through the film.

Oddly, some of the moments I enjoyed the most were seeing the London setting through the film ranging from the bright lights of the London skyline to the local settings light Billingsgate Fish Market.

Emma Thompson has a minor role as a therapist that Jones is required to visit once as week (for blood screening) as part of his contract, and the up and coming Alicia Vikander (Ex Machina) has a small part as the daughter of Jones’ late mentor Jean Luc. There is also the briefest of appearances from Uma Thurman in the film.

The film is directed by John Wells whose last film director role was the well received ‘August : Osage County’, and its screenwriter Steven Knight is of strong ‘London film based’ background having written the screenplays for both Eastern Promises in 2007, and 2002’s ‘Dirty Little Things’

It is an enjoyable enough story, albeit somewhat formulaic and predictable and is somewhat of an ode to the extent that chef’s obsess about the Michelin star ratings. Cooper and Miller do what they can but ultimately the story isn’t up to too much. It lacks the charm and heart of Jon Favreau’s 2014 film ‘Chef’ but is a pleasant enough serving. I wouldn’t watch the film if you’re hungry though.