Trumbo is the new film from director Jay Roach, (whose previous work includes ‘Meet the Parents’, ‘Borat’ and ‘The Campaign’) and writer John McNamara.

The film recounts the true story of Dalton Trumbo, played in the film by Bryan Cranston (TV’s Breaking Bad, and films including ‘Godzilla’ and ‘Argo’), who was a member of the ‘Hollywood Ten’ – a group of script writers blacklisted in Hollywood due to their affiliations with the communist party.

As the film opens in the late 1940’s, acclaimed screenwriter Trumbo is about to sign a contract with MGM establishing him as the highest paid writer in the business. He is the friend of film stars such as Edward G. Robinson, and is known to celebrity columnists like Hedda Hopper (played in the film by Dame Helen Mirren).

Alongside this, Trumbo is an active member of the Communist Party of the USA, as are a number of his colleagues.  With the start of the cold war, elements of the USA have become highly suspicious of domestic members of this party and there is increasing desire to know who they are. This peaks with the creation of the Un-American Activities commission, a house hearing to which a number of suspected communist party members were subpoenaed and questioned.

After these hearings had taken place, and the group had refused to answer their questions, they were blacklisted by the studios, effectively removing their entire livelihoods.  The film shows the attitude of some Americans at the time with mindsets that ‘One Communist is one too many’. 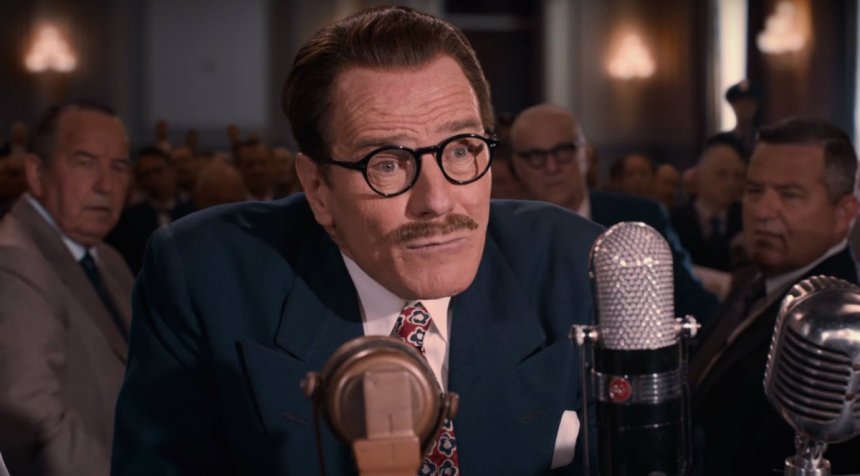 This film tell tells the tale of Trumbo and his colleagues not only in the build up, and period of these hearings, but also of the aftermath as they found ways to continue their craft. In fact going on to receive acclaim, with the industry still unaware of who they were actually recognising. Not only following the writers though, the film gives you insight into some the actors involved in the story from both supporting the writers (such as Robinson) and from being on the opposite side to the communist supporters (such as John ‘Duke’ Wayne).

Its a compelling tale that features some fantastic performances – Cranston especially as Dalton Trumbo is easily his best film performance of all time and thoroughly deserving of the Best Actor nomination that he has received for it.

Surrounding Cranston are a number of excellent supporting roles – Diane Lane is also impressive in her role of Trumbo’s wife, as is Mirren as Hopper. Comedian Louis C.K. gives a strong performance as one of Trumbo’s colleagues and John Goodman is excellent as a studio head. Additional mention to Adewale Akinnuoye-Agbaje who certainly makes the most of the small number of scenes that he is in.

The score by Theodore Shapiro is also fantastic and one that I will be listening to again with its cool noir-esque LA sounds from the 40’s that feel very reminiscent of the period.

Ultimately the film leaves you with a mixed set of emotions around Hollywood. It reminds you of the glory age of the silver screen and some of its biggest stars, but also is direct in its portrayal of the darkest period of its history.

But ‘Hollywood’ has also delivered a great film in ‘Trumbo’.