Few things signal the Christmas period than the appearance of Clark W Griswold and his family prepping for their festive vacation.

Yes, for the next Christmas film on the Film Geeky list, it is 1989’s National Lampoon’s Christmas Vacation.

The third in the Vacation series sees Chevy Chase returning to the role of Griswold patriarch with the return of Beverly D’Angelo as his long suffering wife Ellen. The film sees the third iteration of the Griswold family, this time with Juliette Lewis as Audrey and Johnny Galecki as Rusty.

Directing the film is Jeremiah Chechik with a script written by John Hughes who had written the previous 2. It would be Hughes’ last direct involvement with the Vacation series.

In this now classic part of Christmas viewing, we see the Grisowld family preparing to host their larger family over the Christmas period. Preparations include gathering the hugely oversized tree,  covering the home in thousands of lights and of course, coping with the various eccentricities of the family members.

To add to this, the surprise arrival of cousin Eddie (Randy Quaid) and his family, their regular run in’s with the yuppy couple next door (Julia Louis Dreyfuss and Nicholas Guest), and the tension as Clark waits for his big holiday pay bonus are all raising the stakes on this seasonal tale.

I’ve always been a big fan of Chevy Chase – one of my favourite all time films is Fletch (thats for another day) and this is a film that I’ve always enjoyed. The sad truth is that this film (that is now 27 years old) is his last decent output. Most comedians from that era have had one or two moments since the 80’s where they’ve been able to deliver but Chase has sadly never found a vehicle that worked. His own brief performance in the disastrous 2015 Vacation serves as a damning example of where he has gotten to.

Through this then, this film offers a reminder of his ability as a physical comedian and his dry wit. 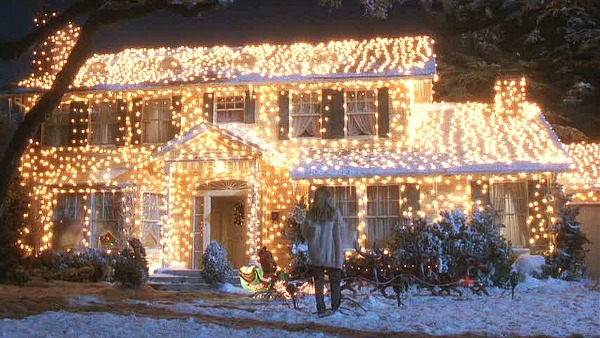 What is always amusing to me in the film is a brief moment as his boss walks past him and his various followers walk past Chase. Chase seems to cease being Clark Griswold briefly and insults them in a style far more like Fletch. It is one of my favourite moments, an odd nod to his other famous character.

The film hasn’t aged too well and the jokes are so well known now there is little surprise. However it remains a true Christmas classic and the period wouldn’t be the same without it.