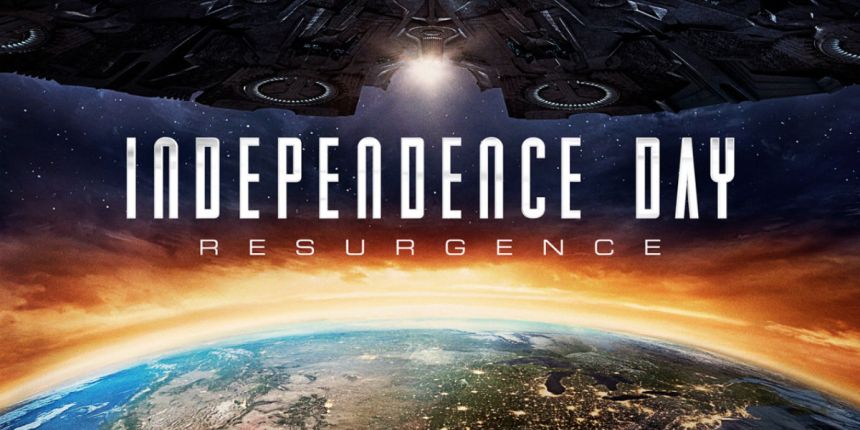 I genuinely thought it was a joke when someone told me that they were actually working on a sequel for 1996’s Independence Day. A film that I wasn’t a big fan of at the time, but I could appreciate its commercial successes and did enjoy the charismatic performance of Will Smith punching an alien (“Welcome to Earth!”). It was of a time that the big summer blockbusters were working through disaster scenarios from Volcanoes, to Asteroids, to Alien attacks, and made a huge amount of money at the box office.

So 20 years on, they’re back. Well Will Smith isn’t (they very quickly establish his character as dead incase you dare hope for his appearance later on), for some sort of reason to do not wanting to do a father and son science fiction vibe movie.

The director of the first, Roland Emmerich, is indeed back though, with a screenplay accredited to 5 people (warning sign there…) – James A Woods, Nicolas Wright, Dean Devlin, James Vanderbilt and Roland Emmerich.

Regardless, the rest of the group are back Jeff Goldblum, Bill Pullman, Judd Hirsch, Vivica A. Fox, and of course those pesky aliens.

The film is set present day, with the countries of Earth having moved beyond their petty issues after the alien attack and now having used the remaining alien technology to develop new transport, energy and of course weapons.  US President Elizabeth Lanford (Sela Ward – Gone Girl / The Guardian / The Day After Tomorrow) is leading the celebration on the anniversary of the attack and of course Pullman’s President Whitmore’s big speech.

This film doesn’t work on a number of levels. The easiest and most accessible is that the plot is nonsense. In an attempt to move beyond just ‘aliens are coming’ they drift into unnecessary complexity. But none of that complexity really adds anything other than a lack of coherence.

Beyond the plot, the film is missing anyone with the charisma of Will Smith. They film has a young core of cast members led by Liam Hemsworth, including Jessie Usher, Angelababy, Travis Tope, but the group can’t create enough attachment from the audience for anyone to really care.

But here is my other main issue with the film.

Most ‘disaster / end of world’ scenarios, operate with a fairly basic premise. Some examples from both good and bad films;

These are all easily accessible ‘jeopardy’ situations to then build out from. The problem with this film is that it’s premise is ‘What if many years aliens attacked, but we beat them and used their technology to develop 20 years worth of new stuff and weapons, but then they came back?’.

As a result, the place being attacked isn’t not an Earth we recognise. It doesn’t feel like our battle. Not that films can’t be set somewhere else (Star Wars did pretty well) but that film took the time to establish where it was set. Here we watch an Earth that we don’t recognise being attacked and are supposed to care.

The other thing of course is that when the original film happened, we hadn’t really seen anything like it. This time? Well only a few years ago this sort of attack happened and The Avengers sorted it out and there’s only a handful of them…

The premise is off, the cast lack a star, and its overly complicated. Throw Will Smith in and we dodge  one of those issues. But even with him, this thing was all wrong before it started. Its hard to fault the effects and the scale but that’s just not enough.

The only hope for humanity is that they don’t make another one.