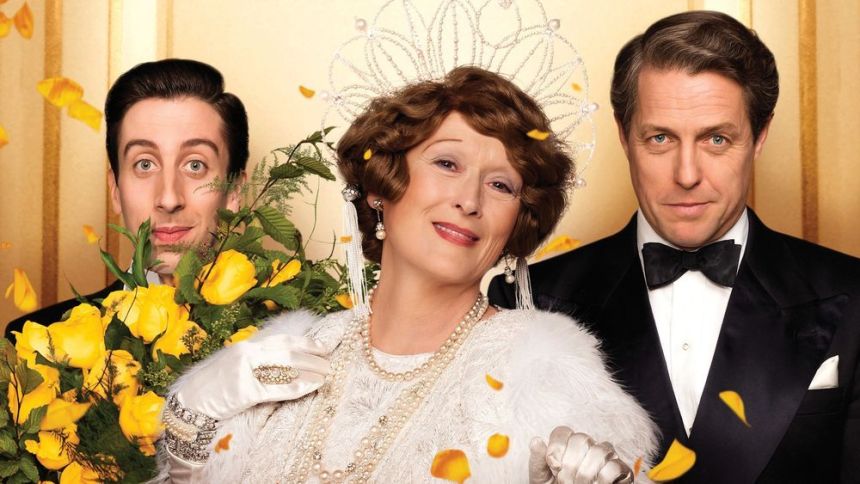 Florence Foster Jenkins is a biopic film of the true story of the wealthy New York socialite who was able to become a star around the theatrical community of New York in the 1940’s even though she lacked any ability to sing. It was directed by Stephen Frears and written by Nicholas Martin.

As the story opens, Jenkins is featuring in a theatrical performance as part of a society that she founded. The guests are all wild supportive of her performance, led by her husband St. Clair Bayfield, played by Hugh Grant, is hugely supportive of her activities and is living somewhat of a double life as most evenings he leaves his wife to spend nights with in an apartment that she pays for, with his girlfriend Kathleen (Rebecca Ferguson) Bayfield has effectively created an environment so safe for Jenkins due to her wealth, that her diabolical singing performances are applauded and cheered by people, with a singing coach hugely complimentary of her performances, based on the large fees that he is receiving.

Beyond the initial joke of the reality of her actual singing voice, what opens up around the story is a warm hearted tale. Hugh Grant delivers one of the best performances I’ve seen him deliver as he plays the loving husband who is desperate to help his wife find happiness and to protect her from the reality of the situation as best he can.

To say that Meryl Streep’s performance in a film stands out, and makes the film worth watching alone seems so blindingly obvious that it feels pointless now given how many of her films that that rings true. However it is equally true of this film.

The humour of the situation and Streep’s ability to hit all sorts of musical notes (although in the wrong order) quickly begins to a sense of cruelty when her audience laugh at her.

Beyond a character of ridicule for her lack of grasp of her own singing voice, you find yourself caring for her through the tale of her own life story and the performance of Streep. Whilst being a tale with real comedic moments, it is deep down an inspirational tale of someone whose passion greatly outweighed  a lack of talent.