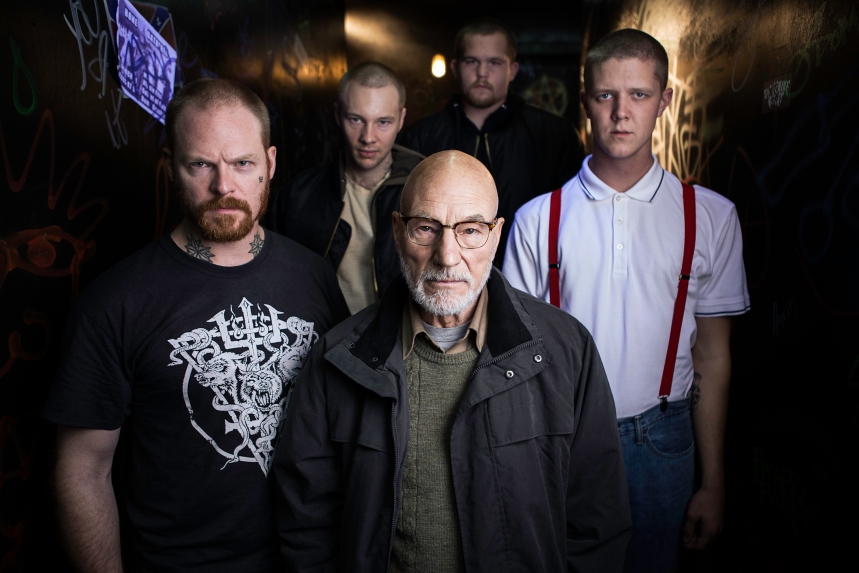 The 2015 horror thriller Green Room is the third feature film by writer / director Jeremy Saulnier (whose previous film was the 2013 Blue Ruin).

The film follows a young band on a low budget tour in Oregon, who take a gig at a roadhouse bar, which is a haven for a local neo nazi group. Members of the band include the late Anton Yelchin who was most famous for his role as Chekov in the rebooted Star Trek franchise films.

Having finished their set, the band, whilst being led out of the bar, stumble across a scene of a murder, which is where the film really starts off. The band locked in the green room (i.e. the waiting room for the performers) find themselves desperate to leave but with a gang outside trying to lure them out to stop them from contacting the police.

The owner of the bar, and leader of the group Darcey Banker soon arrives in the form of Patrick Stewart.

The construct of what plays out has a feeling of the original Purge film with the group locked inside the room, with increasing levels of danger and tension outside.

Through the film there are moments of graphic violence that come out of nowhere but are brief and the overwhelming sense from the film is less ‘horror’ and more ‘tension’ with the claustrophobic feeling that the setting creates throughout. For me, it offered more characterisation that I would have expected in a traditional film of this sort as the film develops.

Its a role like no other that I’ve seen Stewart play and he stands out in terms of the menace and quiet threat that he brings to the film, which wouldn’t work without the impact that he has throughout.

If its a genre you enjoy, then I think you’ll really enjoy the film.