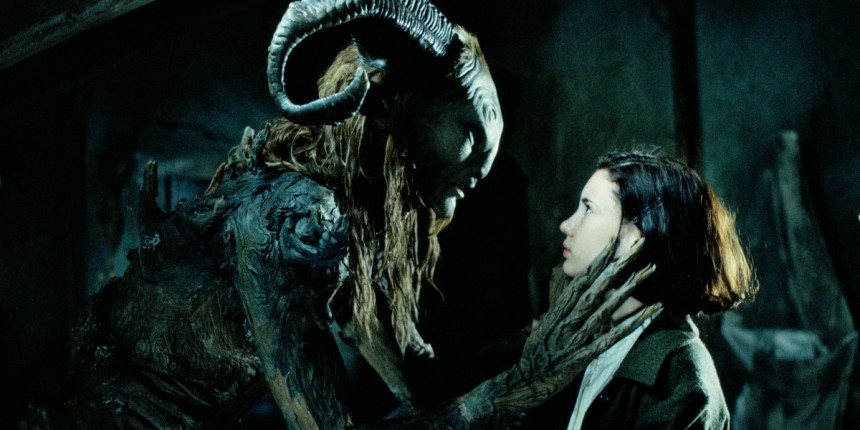 It’s time for P in the Alphabet Challenge, and the spanish fantasy drama Pan’s Labryrinth (or El Laberinto del Fauno in its actual language).  The film is both written and directed by Guillermo Del Toro (Pacific Rim, Crimson Peak, Hellboy).

The film is set in the year after the Spanish civil war and follows the story of a young girl called Ofelia who is the reincarnated soul of a princess called Moanna. Princess Moanna escaped the kingdom of the underworld many years ago and although she died, her soul has returned.

The film tells the story of Ofelia (Ivana Baquero), who is approached by a mysterious Fawn who offers to help her return to the underworld if she is willing to complete a number of tasks initially taking place within the ruins of a labyrinth near where she lives.

Meanwhile, the film also tells the story of Ofelia’s family. Her mother (Ariadna Gil) heavily pregnant is suffering with related illnesses, and her step father (Sergi Lopez) is a cruel and vicious army officer that is hunting a number of rebels hiding in woods nearby.

The film is absolutely stunning in terms of visuals. In is like no film I have seen before in terms of its creatures, settings and creativity. Fantasy is a genre that I have struggled with in the past yet this film is an incredible work of invention, and story telling. It combines the fantastical tale of Ofelia and the Fawn’s challenges, with a military drama story set in post civil war Spain to a remarkable end.

There is something always intriguing for me when I see a film that has been written and directed by the same person. It speaks to a vision of a story that they themselves have near sole responsibility for the creation of. As a result it offers what can be an unfiltered opportunity for an ‘auteur’ to tell a story.  There have been recent examples when it can go very well, Manchester by the Sea being a good example. This is another.

It is a wonderful film is one that I would thoroughly recommend to anyone that hasn’t seen it. To my mind is is easily the best of work Del Toro.