David Brent, former star of early 2000’s fictional reality TV show The Office, is back. He’s back, again in the form of Ricky Gervais and he is going on tour.

The 2016 film David Brent : Life on the Road is written, directed by and starring Ricky Gervais based on the comedy character that launched his career.

The film centres on the now sales rep for Lavchem, a bathroom chemicals and cleaning product company as he attempts to launch a music career for himself and his backing band Foregone Conclusion. The band itself are a group of session musicians who as a theme don’t really like Brent. He’s also enlisted the help of young rapper Dom Johnson (Ben Bailey Smith) to support him on some of his new material. 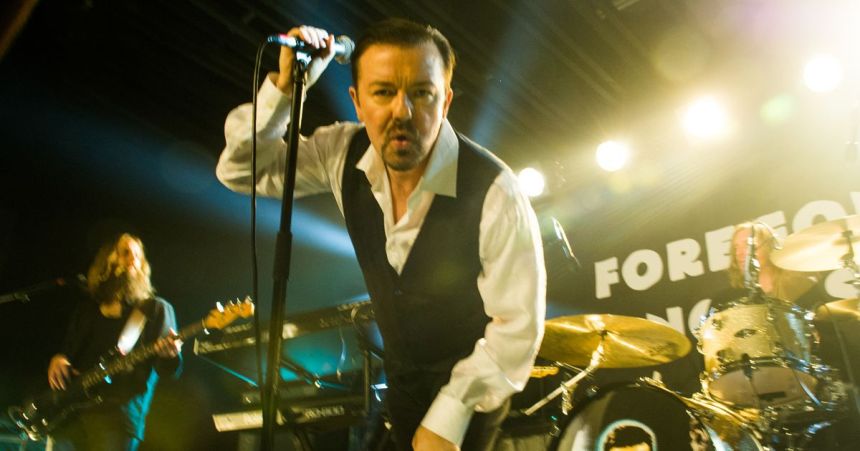 The film maintains the almost painful sense of awkwardness that the original TV show had. It’s lost its freshness and novelty, of course, since the original hit the TV screens but it maintains the humour and Gervais’ ability to capture the role. The dynamic of the band setup attempts to recreate the awkward team environment that the show used, with Brent at the helm, but it doesn’t manage to quite capture the affectionate humour it came with.

The highlights of the film are built of the Freelove Freeway scene of the TV show, as Brent offers new material to various bewildered crowds, all with the traditional mix of engaging melodies and misjudged political correctness.

Off the top of my head, I think its easily Gervais’ best work on the big screen, and frankly miles and miles better than the majority of his work in cinema.

I suspect it won’t last and will quietly drift away, even though the TV show it is based on will remain a classic. However, even with that, it’s an enjoyable visit to see an old friend and a reminder of the complex character that Brent is.