Posted on February 8, 2018 by Film Geeky Leave a comment 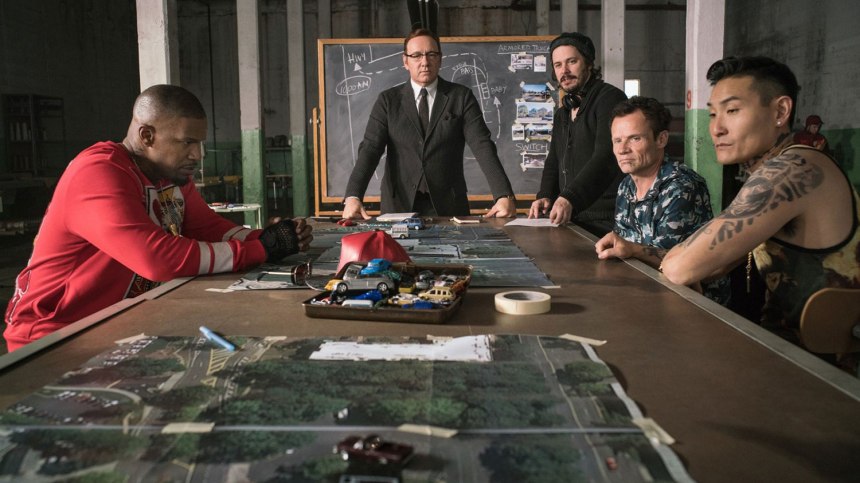 Baby Driver is an action thriller with a hint of musical, by writer director Edgar Wright (Shaun of the Dead, Hot Fuzz, Scott Pilgrim vs. the World) released in 2017.

The film stars Ansel Elgort (Divergent series) as Baby, a young man with a gift for driving – most notably driving getaway vehicles.

Due to his suffering of tinnitus, Baby is constantly found with headphones on listening to assorted music, which features throughout the soundtrack of the film.

We find Baby working his final getaway jobs for Doc (Kevin Spacey) as he pays off a debt from earlier in his life when he stole one of Doc’s vehicles. After Baby works to complete pays off his debt having assisted thieves including Jon Hamm, Jamie Foxx and Flea, he attempts to escape the world of heists, which turns out to not be as easy as he had thought .

This all takes places as he develops a relationship with a young waitress (Lily James) called Debra who works in a diner that Baby frequents.

Plot wise, it’s not wildly inventive but the thing with Baby Driver is the way the it blends the soundtrack into the film, to create a sort of action musical but without any of the characters singing the songs. Instead Wright weaves the music into moments within the film itself from gun shots meeting the rhythm of the songs, to Baby tapping piano notes on a desk.

And it is this, that really turns Baby Driver into an enjoyable, quirky action thriller.  The soundtrack holds the weaker and predictable plot up at times (especially in the middle third) but what Wright has created is a fun and engaging heist movie.

If you combined the 1978’s The Driver with La La Land, you probably end up with something like this – and there’s nothing wrong with that.