This review contains spoilers. So if you want to watch it, then don’t read on. But if you’re planning on watching it, me ruining some plot points is the lesser of the evils facing you…

I don’t know why I even bothered to watch this. Well, that’s not true. At a time where superhero films are a huge business, I thought it would be interesting to see some of the early attempts to reinvigorate the superhero genre, before Marvel really got things going.

So to 2004’s Catwoman I turned. Starring Halle Berry – a superstar at the time, coming off the back of her Oscar win for Monster’s Ball, in the lead role. Berry stars as Patience Phillips, a mild mannered artist for a beauty product company run by the husband and wife team of George (Lambert Wilson) and Lauren Hedare (Sharon Stone).

The company, soon to launch a new face cream that will ‘reverse ageing’, is sitting on knowledge that the product has a number of extreme side effects. These range from headaches through to scarring. 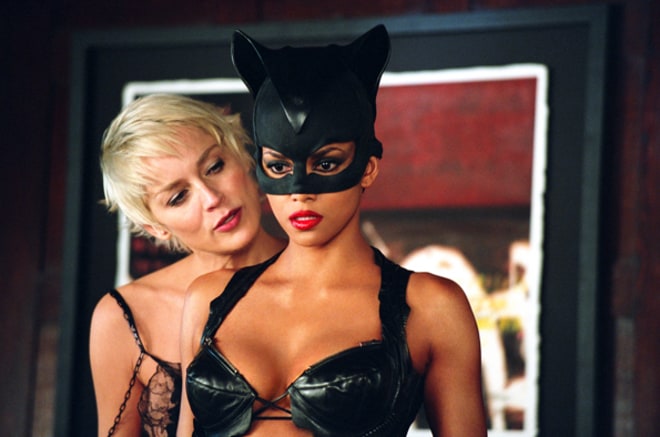 It also turns out that if you use it enough, in the case of Sharon Stone’s character, your skin turns to the strength of marble.

As Phillips unwittingly stumbles upon this, she is murdered by Hedare’s security team, only to be reborn by a mystical cat (stick with me here). When she awakes, she operates between the two personna’s of Phillips and the Catwoman.

The film plays out with Catwoman seeking to find out who tried to kill her, and exact revenge.  All whilst police officer Benjamin Bratt tries to both solve the series of crimes that the Catwoman is associated with, and woo Phillips.

The film is riddled with awful writing, hammy performances (especially Berry), and very bad CGI. Stone easily makes for the worst villain in comic film history and Berry near the worst hero. To have landed Berry in the lead role, there was an opportunity to really achieve something with this film. It is a gigantic missed opportunity and the director and producers especially should be ashamed.

This is a terrible film that ironically, given the plot, has aged very badly.