Posted on November 24, 2019 by Film Geeky Leave a comment

M. Night Shyamalan’s Unbreakable from 2000, is a powerful example of both an auteur at the top of his game, and a contemporary approach to a genre that is now running amuck in cinema

In 2000, M.Night Shyamalan released his second major Hollywood film – Unbreakable. The previous year had seen his first major film, The Sixth Sense, become a huge global hit and he was riding high.

In Unbreakable, he stepped into a form of modern day, contemporary view on the superhero film genre, and in doing so created what remains my favourite of all of his work.

In the film Bruce Willis plays David Dunn, a security guard at a football stadium who is involved in a terrible train accident and miraculously is the only survivor, uninjured in the accident.  As he attempts to settle back into life with his son and nearly estranged wife (Robin Wright Penn), the mysterious Elijah (Samuel L. Jackson) begins to approach Dunn, asking questions about how he could have possibly survived the disaster. 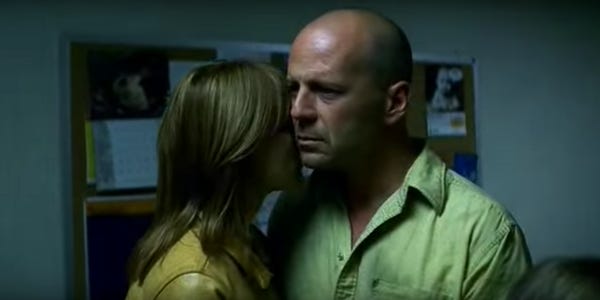 Through these questions, Dunn is set on a journey of self discovery which makes for a remarkable film.

This film has a huge amount going for it, and it really does represent (for me at least) the peak of Shyamalan’s early work. It is shot and framed beautifully (with many shots feeling like they are out of a comic book). The use of colour, lighting and arrangement is powerful in setting real visual power into the movie. Furthermore,  the score of this film, by James Newton-Howard is stunning. If is full of tension, drama and soaring heroic moments.

All of these elements of both content, and technical skill combine to create a fantastic film that is far bigger than the sum of its parts. It was Shyamalan demonstrating his auteur capacity at a time when his powers seemed unbreakable (this would be proven not the case in later films – especially by the time that we got to The Last Airbender and After Earth)

Somewhat ironically in the era of superhero films that we now find ourselves in, I think that this film is more accessible to audiences now that when it was released.  For me, it is a film I probably watch once a year on average and remains for me, a powerful example of both an auteur at the top of his game, and a contemporary approach to a genre that is now running amuck in cinema.

In years to come, the film would be connected to a film called Split, but thats a story for a different time.