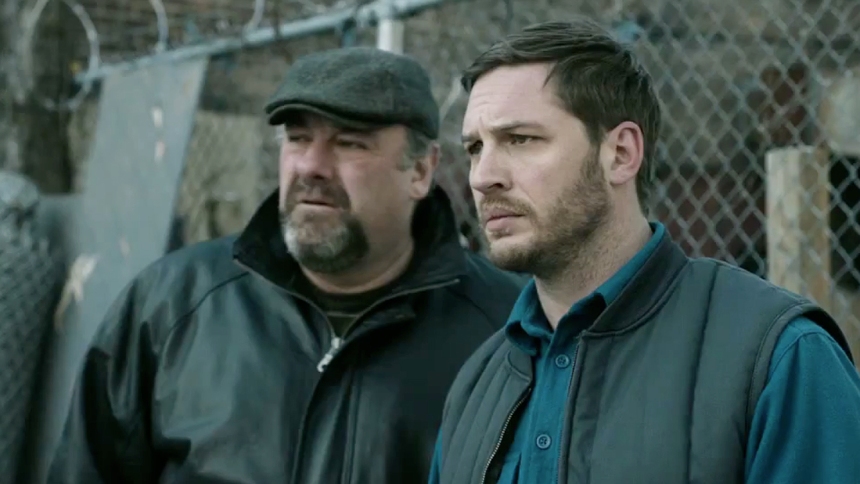 The latest film adaptation of the works of Dennis Lehane takes to the big screen with The Drop, a 2014 version of his novel Animal Rescue. Previous films based on his work include, Shutter Island, Gone Baby Gone, and Mystic River. A new film based on his work is due to be released in 2017 – Live by Night starring Ben Affleck.

The Drop has a screenplay by Lehane and is directed by Michael R. Roskom (only previous full length film is Bullhead – a Belgian crime film). The film also is the final on screen appearance of James Gandolfini, who died in June 2013.

Drop Bars, are designated bars on a nightly basis around Brooklyn where money from illegal activities are stored and passed onwards through criminal chains. The bars are only required to store then pass on the money, and only find out when they will be the drop bar for the area, at short notice.

The original name of the novel, gives a true sense of the narrative of the story as we see each of the lead characters, trying to find their own sense of recovery and rescue through the film.

The film follows Bob (Tom Hardy) a bartender at the bar previously owned by his cousin Marv (Gandolfini), the bar now owned by Chechynan criminals. Bob and Marv are both held up one evening whilst they are the drop bar, and Bob finds himself drawn into the aftermath of the robbery.

Alongside, Bob finds himself caring for an injured dog, and through this, beginning a friendship with Nadia (Noomi Raapace).

The role of Bob sees Hardy take a restrained performance, and in the quiet and simple strength of the character, he is reminiscent of Stallone’s best non fighting moments as Rocky Balboa.

The film is a tense, dramatic crime thriller in a tradition’s of Lehane’s previous work. Gandolfini especially stands out, in a fitting performance for his last screen appearance. He may be forever known for his role in Tony Soprano, but his death was as much of a loss to cinema and the performances, like the one in this.