The 2018 Holmes and Watson is a masterclass in ill considered, poorly executed and misconstrued comedy that is remarkably far from funny.

Classic comedy partnerships has always been a part of modern cinema and Will Ferrell and John C. Reilly’s partnership films of Talladege Nights : The Ballad of Ricky Bobby (2006), and Step Brothers (2008) set them on the path to continuing this trend, with a further pairing in Anchorman 2 : The Legend Continues (2013)

So to their fourth joint movie out last year – Holmes and Watson. The film sets the two as the famous detective (Ferrell as Sherlock Holmes) and his partner Dr John Watson (Reilly). The film was both written and directed by Etan Cohen, who previously directed Ferrell in the 2015Get Hard , and was produced by Adam McKay (Anchorman, The Big Short, Vice)

In the film we find Holmes and Watson, attempting to solve a murder that has taken place in Buckingham Palace, with a message from Professor James Moriarty (Ralph Fiennes). Should they fail to solve this challenge, Holmes’ nemesis will kill Queen Victoria in a few days time. 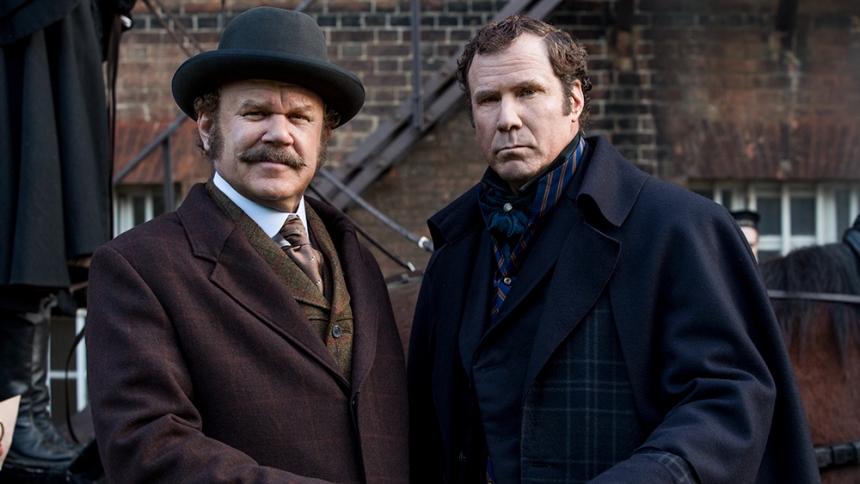 Given the comedic background of the two stars then, it is remarkable just how bad this film is. Genuinely remarkable.

The classic shtick of the two leads is ‘overly confident buffoons’ and that is exactly the plan that Cohen has cooked up for this film. Problem is that it doesn’t work.

In part, I suspect that there is a jarring to trying that approach to the two characters of Holmes and Watson. That’s not to say that there isn’t humour or parody to be found in 221b Baker Street – Michael Caine and Ben Kingsley proved that there is in 1988’s Without a Clue, as did Gene Wilder in 1975’s The Adventures of Sherlock Holmes’ Smarter Brother. However Cohen’s offering lacks any such success.

The bar of what this film offers as humour in the film couldn’t be lower and plunders the lowest levels of slapstick, idiocy and sexual innuendo that I’ve seen in a long time. Plot wise, the film is a mess. The two main characters lack any of the charm that their previous shared roles have had, and worse when they’re dealing with such well known roles. It tries to take every chance to get a cheap laugh and ends up with no laughs at all (really – I didn’t laugh once).

In truth, you would think that having Ralph Fiennes as Professor Moriarty alone would be the basis for the start of a good film. However even this seems a completely wasted opportunity aside from all of the other pieces that were there. It’s like someone managed to take everything needed

The only reason that I’m writing this is to offer you, a chance to avoid 90 minutes of some of the worst cinema that I have ever seen.